A Tyrepower deep dive into the world of Cooper Tires. 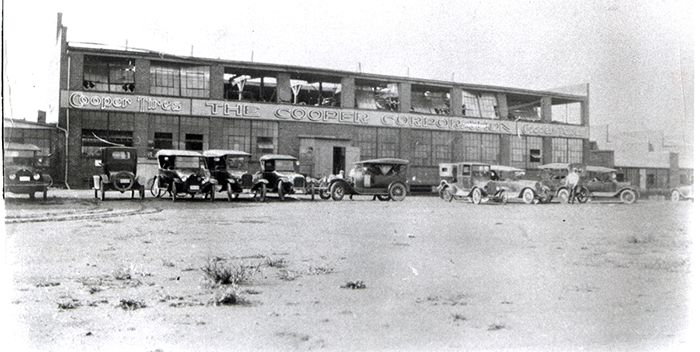 The Cooper Corporation just before it became The Cooper Tire and Rubber Company over 100 years ago.

In 1914, two brothers-in-law from Akron, Ohio purchased the M & M Company which was at the time, making tyre patches and repair kits. The new owners then purchased the Giant Tire & Rubber Company to make "rebuilt" tyres before moving the business to Findlay, Ohio, in 1917. The company still operates from the same original location in Ohio.

Little did the brothers know that another investor was moving to town, an investor by the name of Ira J. Cooper who was a Cincinnati based auto-parts dealer. Ira J. Cooper had moved into the adjacent building and began manufacturing new tyres. These two companies would later merge in 1930 and form the Master Tire & Rubber Company.

Like a lot of rubber companies during the 1930’s and 1940’s, Master Tire & Rubber converted to wartime production of inflatable rafts, pontoon bridges, lifesaving devices and waterproof bags. Decoy tanks and landing boats made by the company were used in the Normandy Invasion and throughout the European campaigns.

In 1946, the company name was changed to Cooper Tire & Rubber Company. In 1960 the company was listed on the New York Stock Exchange.

Fast forward to today and the Cooper Tire and Rubber Company is in the top 10 tyre manufacturers globally and 1 of only 2 that remain American owned, although the company has expanded to 3 major manufacturing plants.

The story behind Cooper Tires in Australia began in 1988 when the general manager of his family's store, Terry Smith attended the International Tyre Expo in New Orleans, America.

Terry came across the Cooper brand at the expo and began importing the tyres into Australia. In the beginning, they were available exclusively through the family’s stores but as demand for the brand became increasingly popular, Terry and his wife started an exclusive Cooper Tire importation business in Brisbane Queensland.

From there, the Cooper brand has continued to flourish. None more so than in the off-road 4WD sector. With extensive research and development both in Australia and the USA, Cooper has proven to be a strong contender with a great range of diverse tyres ranging from quiet tourers to rugged All-Terrain tyres capable of handling anything the outback can offer.

Tyrepower stocks a wide range of Cooper tyres in over 270 stores Australia wide and of course, you’ll find Cooper in all of our Western Australia stores located around the state. Call 13 21 91 to find out more on the Cooper range and for a store near you.